“Oh, look at that one!” My mother pointed a crooked arthritic finger at a brilliant blue-and-yellow fish circling the tank. I had wheeled my mother around so that she could face the voluminous salt-water tank, the centerpiece of the orthopedist’s waiting room: 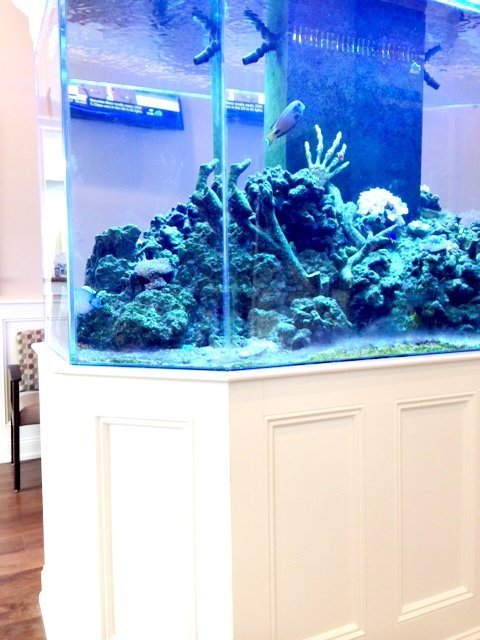 Pin It
Every fish that swam into her view was as remarkable as if it were swimming into her line of vision for the first time: “Oh look at that one, with the pink fins!” The pink-finned fish was circling the tank for maybe the tenth time since we’d signed in for our appointment.

We were at the orthopedist because my mother had broken her wrist the previous week from another fall. I am naive in I assuming falls are avoidable now that she has a full-time aide. “I’m not an invalid!” my mother had screeched when her aide found her walking with her pants down around her ankles.

My own guess is that my mother had been heading toward her bed where she had planned to sit down to take off her pants, but for some reason had started the taking-off-pants process in her walk-in closet. “That’s dangerous,” her aide had said, no doubt sounding to my mother as if she were being  reprimanded.

When my mother yelled as she can do, her aide left the room. Moments later, my mother went down. It’s hard to know who and if anyone is to blame; my mother can be very difficult, as quite understandably, she does not appreciate a stranger living in her house. And the aide does not want to upset my mother by escalating incidents into arguments. My mother’s screeching can be grating…pulverizing, even to the most capable and patient of aides.

Needless to say, her aide now will forgo respecting my mother’s wishes for the sake of her physical safety. In the emergency room, my mother had her arm stabilized with only a splint, to allow a week for the swelling to go down.

We had been told to follow up with an orthopedist. I was incredulous. “You mean like an office appointment?” Funny how even medical folk fail to realize what an office trek actually entails for a frail 95 year old. As did even my mother: “Oh I can walk for goodness sakes, just drop me at their door.”

My mother not only can forget the last two minutes, but she can forget that she can barely walk now with a walker. Even with the new newfangled platform attachment to support her broken wrist. Even before the break, her walker had become cumbersome. Trips to the bathroom are now laborious excursions. She opts to spend most days lying on her bed, as even the trip to her favorite sunroom chair has become too much of a trek.

Day of dreaded orthopedist appointment: It took a full half hour for her aide and me to navigate her down the three steps from her house. My mother could not walk the last five feet to my car. Luckily (very much so), on the keen advice of her aide, I had rented a transport chair (more convenient than a wheel chair! Fits through bathroom doorways!) and happily we were able to wheel her the rest of the way to the car. As happily as I used to wheel my toddler in a stroller.

Back to the fish: Waiting in the waiting room in front of the big tank, my mother could not remember falling, and would ask over and over why she was wearing this unwieldy splint contraption. But whatever is happening to my mother’s mind, she still enjoys the visual. She marveled at the fish as she had magnificent sunsets through her bedroom windows all winter, the way the light had splintered between the bare trees.

I was reveling in her marveling, as I used to with my kids when I’d take them to the aquarium. Or just the local pet store, where the tiny rainbow fish were even marvels. As my mother weakens, as her mind fades, our role reversal is becoming more pronounced. I see a psychologist now who is helping me through this role reversal process. And every once in a while he’ll check in with: “Do you still find moments when you two can enjoy each other as you used to?”

Well, perhaps the answer now is no. But we are able to enjoy each other in a new way. In a way that our roles actually have now reversed. “Look at that one,” I said as the blue-and-yellow fellow swam back into view. As if for the first time. As I only ever remember marveling, back then when it was actually for the very first time, with my own young children.

Author;editor of The Woven Tale Press at thewoventalepress.net; mother; weaver
View all posts by Sandra →
This entry was posted in dementia and tagged caregiving, daughters, doctors, eldercare, elderly, mothers. Bookmark the permalink.

5 Responses to Tale Tues: A Broken Wrist and Brilliant Fish