I’d hit bottom. Literally. Where the stench was beyond that of rancid milk gone sour in a broken over-heated refrigerator.

This was the stench of flesh rotting in an airtight satin-lined coffin six-feet under.
And I’m not bad-scent sensitive; I don’t hang vanilla scented trees in my car, or plug in air fresheners to disguise a-not-so-fresh salmon steak baking in the oven. I don’t light a match before exiting a bathroom.
My mother had lost a brand new pill bottle, and our theory was that it had fallen off her bedside table into her scrap basket, in amongst junk mail and cat hair from when she’d clean the cat’s brush.
A basket which her cleaning lady then dumped into the enormous trash barrel – the “Tipster.” 98-gallon capacity!  Free when you sign up for twelve months of garbage pick up! With a clever latch to keep out even the keenest of raccoons: 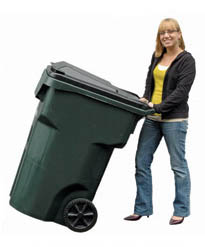 That’s not me. I wasn’t smiling.  But  this photo, courtesy of Norsic, Long Island’s Sanitation Professionals, at http://www.norsic.com/garbage.html , gives you a sense of scale.