Our neighbors were on vacation. I had to go next door to feed their betta fish.

Kenny couldn’t wait to tag along. You’d think we’d never had a betta ourselves, one Kenny hadn’t been nearly as excited to feed. Pets can be like toys; you like them better when they belong to someone else.
Our neighbor’s house had been updated, and the front door keyhole was just like the updated one had been at our NH cottage rental on our own vacation – with a little swinging door over the keyhole itself. And it was just as hard to unlock.
“What if we can’t get in?” Kenny said. “The fish will starve. It could die…”
I was a little panicked myself.  What if their one and only pet did die on our watch?
Actually, except for a single fish. these are not pet people.


At least Mary isn’t. Her daughter had been eager to see our new gerbils. “I really, really, really love my fish, but I really, really, really want a dog.” Ana had been peering at the gerbils gnawing on a toilet paper tube.  “But my mom won’t let me. My mom said a dog will poop on the rug. And she’s afraid of cats, I don’t know why…”
“Gerbils poop too,” Kenny had said.
They do poop. A lot. But hard little round nuggets that I can sweep up, after their exercise workouts on our kitchen floor.
I’d been in our neighbor’s house before, but nothing like being in someone else’s house when they’re not home, when there’s that space to notice details you might not otherwise.
There wasn’t much to notice. The house was spotless. Clutterless. I saw why Ana’s mother wouldn’t want a dog pooping on their living room rug – it was cream-colored.  To match the cream-colored couch.


A trio of framed reproductions of perfectly shaped green leaves, (ones too perfect to ever actually exist in nature) hung above the fireplace. A birch wooden bowl of birch wooden fruit on the coffee table was the only other detail of even mild note.
The fish was in the kitchen, in a girlish pink plastic tank, on the corner of the granite counter. A completely cleared-of-clutter counter; I don’t even remember seeing a toaster. Certainly no pile of worn school folders, stained cookbooks, clutter baskets and messy penholders you’d find on my own counters.
There was not a handprint to be had on the stainless steel double-door refrigerator that Kenny peered into like a mirror. “Don’t touch,” I said as I remind him in museums.
“Why don’t we have one of these? Look, it even has an ice maker.”
“Ice makers break. And besides I wouldn’t let you touch it.” Then I’d have to wash it. Just as I never get around to washing our windows, the ones he draws on with window markers.
“Their house is big,” Kenny said. “It’s bigger than ours.”
“It’s the same size,” I said, though I certainly couldn’t compare the square footage. And why should I sound defensive? I couldn’t care less whether they had a bigger house.  I just didn’t say what I knew, that it seemed bigger because it was pristine and entirely uncluttered. Not a Lego, dirty napkin, book or reams of scrap paper on their coffee table.
Granted, I’m sure Mary was like me, preferred to return to a clean house after vacations. But our house, even when clean, is still cluttered. Cleaning the clutter, I admit, can be simply rearranging it into a neat pile, like my folders on our ungranite, old Formica counters.
This could never be a gerbil house. Not with these new wood floors, as reflective as the stainless steel refrigerator. Their tiny toes might actually leave hairline scratches. This was a fish house only.
The fish didn’t look too good. He sat on the bottom. His head was hanging out of the princess castle.
“He’s dead,” Kenny said.
Even after I turned on the tank light, he just lay there. That’s how our own betta had died, in his little hut.
He moved! He’d just been sleeping. I don’t remember our own betta ever sleeping that soundly.
He took a long time to wake up, and as we waited for him to eat a couple of food balls, I glanced out at their backyard. Pristine. The mahogany deck was freshly stained; I’d seen Mary out there that spring, on her hands and knees, brushing on the stain herself. All the chairs were pushed in nicely around the big deck table. The centerpiece, a lush pink geranium in a blue-glazed pot, bloomed brilliantly.
“Wish we had a big house,” Kenny said as we relocked the door.
“Our house is big enough. It just seems smaller because your stuff is all over the place.”
Thankfully, the house was easier to lock than unlock. Walking down their steps, I couldn’t help envying the pots of petunias on their porch. How does anyone get things grow like that? The white Adirondack chairs were clean. And white.
I found some solace in our neighbor’s taste not being mine. But walking back to our own very unpristine house, I was bothered – as soon as I walked up the front steps. The morning sun shone at that precise angle to highlight the cobwebs in all their dewy splendor; I hadn’t swept the porch all summer. There was one sad ivy plant, and it was only there because it was sick; I didn’t want its disease to spread to my other houseplants.
Before we’d left to feed the fish, I’d thought I’d been leaving behind a clean house.  Now I knew it depended on your definition of clean; yes, I had vacuumed and dusted just the day before.  And rearranged, if not gotten rid of, actual clutter. But the boys’ “stuff” was everywhere already; Legos dumped again, making it easier for them to seek out tiny pieces they can’t find just by digging through the box. Scraps of paper littered the living room floor, as Ryan had been cutting and taping paper spear heads.
And dirt. Damn. I really hate when the sun falls so precisely, to highlight even the dust along the baseboards.
I glanced out our window at our own backyard deck. No nice large table with pushed-in chairs. Just a second-hand glass one. With no chairs.
Though I noticed the table now had a centerpiece. No flowering pot, but I appreciated it all the same, if not more, as it was the ingenuity of my boys: 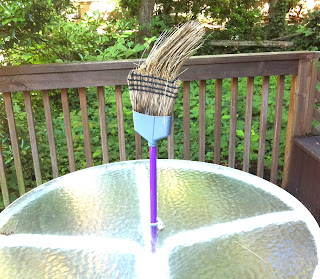 And if our house were pristine, I would have to wash the windows, as I have seen Mary doing, sometimes first thing in the morning, maybe even before her first coffee. I would have to wash away Kenny’s scrawled purple dragons and silly faces. And if I had stainless steel appliances, I would not have the heart to wipe away those small handprints – truly more splendorous than even the dewiest of cobwebs.

18 Responses to Feeding the Fish