Time to CHECK OUT!

“Where can I pack this?” Ryan held up a tiny Blue Jay feather.


I was sweeping up the Carefresh cage bedding littering the carpet, marveling at how we’d actually transported our new gerbils in their ten gallon tank, all the way to New Hampshire. I was already covered in sweat, and it was only 9 am. Now checkout of our rental house was in one hour.


I’d tried to get the boys to pack up their own stuff. I’d asked Kenny to scoop up the Star War Legos, thousands of them it seemed, that he’d dumped in the middle of the living room rug. He’d put away one or two, before becoming involved in building a ship.


At the time of Ryan’s actual discovery of the Blue Jay feather, we’d marveled at its striking beauty. Not now.


“Pack it wherever you’ll remember it,” I said to him, and moved on, picking up cheese-stick wrappings. “What is it you can’t actually throw these things in the garbage?”


“You have a bag.” Ryan loved bags. He’d bought his kid’s messenger one, for all his paraphernalia, Pokemon cards, and special vacation finds. “It has that nice little clear pocket on the outside,” I added. “Perfect for a feather.”


“It will get lost. I need a Ziploc bag. Do they have those here?” He headed for the kitchen to rummage through the drawers.


He came back with a gallon-size freezer bag.


I told him he didn’t need a gallon-size freezer bag for an itsy bitsy feather.


Besides Legos, cheese stick wrappers and gerbil debris, there were trails of potato chip and cookies crumbs, and the blue ice I had tried to scrub off the cream carpet, only to leave a bigger bluer stain. Every year, we wound up in this same frenzied state on these checkout mornings, when it always seemed a tropical 100 degrees. I’d sweat through my underwear so it was stuck up my butt. “All right. But go now and clear all that wood off the deck. ”


I knew this was a mute demand, as Ryan is a collector, hoarder really, and every twig he’d brought back from his forest forays was “special.”


Ryan looked stricken. “What do you mean?”


“I mean go put it all back in the woods where it came from.”


I paused in my manic sweeping. “Ryan. You can’t take them home.”


He skipped out the door happily.


Kenny was quietly making his ship. At least he wasn’t bothering me.


I went to get a status on Gramma who hadn’t even emerged for breakfast yet. Packing for Gramma didn’t just mean a suitcase. It meant a lot of recycled paper gift bags for last minute pairs of shoes and enormous vitamin bottles.


I knocked on her door. She opened it a crack. She didn’t want me to see what I saw, her bureau covered with those vitamin bottles, and other loose things, hairbrushes, books, lipsticks. . . She knew I yearned to sweep them all quickly into one of those gift bags.


“We have to leave in a half hour,” I announced in the most casual, gentle voice I could muster. My sweat-soaked underwear felt like a most uncomfortable thong. A butt flosser.


“So what if we’re an half hour late.” She shut her door. She hates when I rush her, especially for doctor appointments.


I went outside to empty the trash bag. Ryan’s forest collection was still on the deck. “What’s this?”


Ryan was admiring a stick. “I did go pack my one really special one. I just….” He shook his head. “I’m going to miss all these….”


Daddy magically appeared. He’d been packing the cars; we had two cars this year, since he’d come separately midweek, so decisions had to be made about what would go where. Especially since his car was spotless, unlike my far more kid-friendly minivan: no old melted candy canes now melding with pooling sticky fruit roll-ups stuck to Daddy’s seats. And no doubt, no tree branches.


“Come on Ryan, let’s do this now, get all this back where it belongs, in the woods.” Bless his fatherly influence, as only he can motivate Ryan at home, in that manly tone, to drag big heavy garbage cans out to the curb.


I went to check on the status of that actual car packing. In my van, I found Ryan’s “one” stick: not even a branch. A tree trunk really, that he’d strategically slid under the back seats, to where its leafy head would stick out right between Gramma’s legs, in the front seat.


Then I looked at how much room was left. Only the front seat.


My husband was a fast packer, but perhaps not the most efficient – besides my mother’s bag, we still had to find space for out pets’ ten-gallon tank.


“Where are the gerbils going to go?” I asked him, when they came back from dumping the wood.


He shrugged, brushing birch bark off his shorts. “In the front seat?”


“And where then will Gramma sit?”


For the trip home, the boys wanted to ride with Daddy because he had the iPad, and Gramma would ride with me. And the gerbils. There wasn’t even room on the backseats, where he’d piled the bags of dirty bed sheets, and thrown water gear, inner tubes and forgotten sodden towels found down at the beach.


“You have to take the gerbils then,” I said.


Kenny was suddenly there, the least frenzied of us all. He’d brought out his Lego ship to show off. “Yeah, they’re not even just gerbils. They’re Rosey and Boch.”


This had become a family meeting.


Except for Gramma who was calling from her window; she was locked in her bedroom again.


Thanks to the newly updated upscale rustic doorknobs, Gramma kept getting locked into rooms. Even the boys had trouble, due to how hard these knobs actually were to turn. Even harder for my poor mother with her arthritic hands. She’d finally put first aide tape over all the openings. That had worked! Until now. The tape probably finally had snapped when she’d shut her door in my face.


My husband was ok with my mother when she wasn’t telling him what to do, or what not to eat. And when she wasn’t suggesting he might move into the fast lane to pass those slower vacation trailers.


Still, he was considering the alternative. “Will they make a mess, like in the living room?”


“That wasn’t a ‘mess,’ just some of their bedding spilled when I was changing it….”


He looked skeptical; rightly so perhaps, as whenever I myself drive his car, I leave my hallmarks of empty coffee cups, napkins, and muffin crumbs.


So after freeing Gramma, he chose to reorganize my van to make room for both her and the gerbils.


We did actually get off only a half hour late. And Gramma and I enjoyed the quiet of our mother/daughter ride back home, having space to admire the mountains, a space otherwise that would have been hijacked by two boys whining because they didn’t have an iPad.


In the backseat instead, we had the company of the gerbils, quiet except for their incessant cardboard gnawing, probably as much from frayed nerves as instinct; I worried their tiny brains were rattling in their tiny skulls with each bump in the road.


They made the trip ok, though hovered in their hut looking a bit glassy-eyed and shaken.


And once home, I found a stack of tiny pinecones Ryan unpacked into a neat pile on his desk. I hadn’t known about them, and they were a pleasant surprise, tightly curled and green, as in retrospect, those frenzied life moments can be quite memorable. 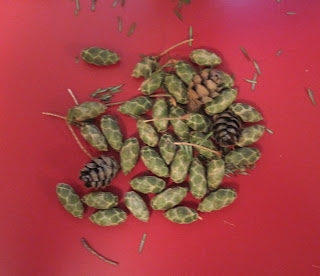 9 Responses to Time to CHECK OUT!