The Beetle and the Mercedes

Ryan has the most fabulous imagination. Today he wouldn’t let Daddy get rid of a large branch because it had the head of a dinosaur.


Later, he asked me what kind of “vehicle” I would like. It was a beautiful Saturday evening. I was sitting on the front steps. The boys had been out all day, and Daddy had been sweeping the driveway and mowing the lawn.


“You can have whatever you want,” he said, standing in front of me, his face smudged with dirt from rolling in the grass and falling off his scooter doing stunts, like trying not to use the brakes.


“It’s a really cute little car. And I want it in red.” I wanted the one that Oprah gave away on her show last November.


He thought a moment. “I can check, but I think we only have yellow.”


He returned with Daddy’s driveway sweeper. “What do you think?” 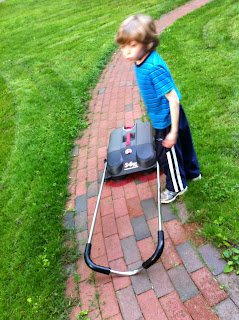 “Just what I asked for.” A sweeper.


He went on to show how the big brushes that would suck the debris into the plastic container were actually weapons. Shooters. In case I run into “enemies.”

When he asked Daddy what kind of vehicle he wanted, he said the Mercedes R. Ryan asked him what color. He wanted tan, but only black evidently was in stock.


Ryan returned with Daddy’s leaf sweeper, which works like the driveway sweeper but on grass, to get up every last leaf. (Daddy has a lot of machines; besides the sweeper, there’s the leaf blower, lawn mower/mulcher and snow blower.)


The “Mercedes” came with blade cutters. “So I can cut up the cars on front of me on the way to work?” Daddy asked.


“Sure,” Ryan shrugged. “Or cut trees. Though we have no reason to cut trees . . . .” He never did let Daddy break up the large branch/dinosaur.


Daddy looked a bit disappointed. It might be the sinus infection he’s been fighting. Or maybe he really expected his son to present him with a brand new car.


We both asked for a one year warranty, and Ryan said “sure,” having no clue what we were talking about.


When we explained what a warranty was, he then told us, well, if we had any problems, to talk to Kenny, “the wizard, and he’ll wave his wand.” He pointed to his little brother, to the “wizard,” who couldn’t care less about imaginary cars, just having learned today how to ride his two-wheeler. 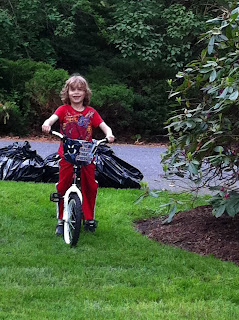 But really. I’m content with the sweeper. My minivan is disgusting. Not even the carwash people want to touch the melted candy canes under the car seats, or the Diego stickers on the windows. So if I can’t have my Beetle, well yes. I’ll drive a driveway sweeper and be proud of it.
Tweet

2 Responses to The Beetle and the Mercedes