We had a new rule. No one was allowed to open the refrigerator without calling a family meeting. None of the normal refrigerator gazing, when precious cold air could escape. We’d been without power now for a day, due to Irate Irene. A truly wrathful lady.

I was armed with a pen and sticky pad. I’d already written down what Daddy wanted, a cold ginger ale. If still cold.
“Cheese stick,” Ryan said.
“How about a yogurt instead?” I said.
“I don’t feel like a yogurt.”
“The cheese sticks will last longer than the yogurt so we want to use those up.”
“Why ask if you’re going to tell us what to eat?” Ryan said.
“Oh, it’s all going to go bad, anyway,” said Daddy. “No one’s going to touch those wires with that tree like that.” He was staring out the window. At the tree, supported only by one wire left intact after, snapping at its base, the fallen trunk ripped out our electrical, cable and even old Verizon wires, along with the meter box. An Apple and internet addict, my husband, suffering from severe Macbook and Yahoo withdrawal, spent a lot of time contemplating that tree, why its sheer weight hadn’t brought down the wires all together: 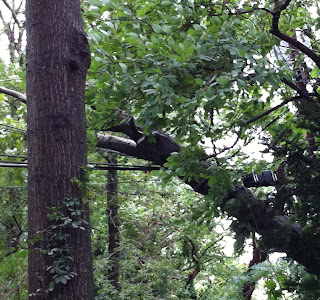 As Irene had simmered down, and neighbors emerged to inspect the damage, our tree became the biggest lure. One neighbor took a photo on his ipad to send to his son away at college. “He just wants to see the reason we don’t have power yet.” If people didn’t take pictures, they were like my husband, watching and waiting for the tree to fall. They’d tiptoe if going for a stroll, or speed up if driving under it.


The tree continued to dangle precariously evening after evening, when the neighbors seemed to have a lot more leisure time, to do things like take pictures. You’d see the dog walkers coming around the block more than once.
That was back when loss of power was still novel, even to my internet-addict husband, who read a book by a battery lamp. Kenny spent a lot of time beaming his flashlight through his toy test tubes of different mixtures of toothpaste, shampoo and crushed chalk. Ryan pretended he was a ninja and a flashlight was his sword. We ate dinner by actual candlelight.
This novelty began to wear off with the loss of hot water – when I let the boys go dirtier than usual, not wanting to have to lug pots of boiled water upstairs for baths. It was enough that I had to boil those pots for dishes, and then actually hand dry even silverware, the dish drain too quickly filling up. I started to ration clothes, (though my husband refused to wear dirty socks more than once); even though the laundry mat may have power, there would be the same lines as outside the Hallmark Card shop where the manager had set up an electrical power strip for charging phones. It would be as packed as Starbucks, the only place with a Wi-Fi connection. We started to ration the flashlight fun, as we had no spare D batteries. No more science experiments in the dark, and Ryan had to resort to making paper ninja swords in the light of one of our only two precious battery-operated lamps.
And the refrigerator. I obsessed over it. I’d stand in front of it, contemplating the clutter of magnets, a deceptive front for the nastiness building inside the cooling, gradually warming dark: 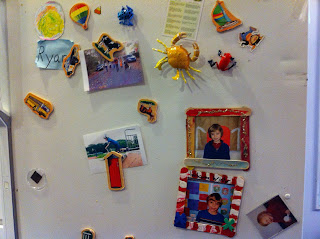 I tried to remember what was in there: eggs, milk, butter, yogurt… I imagined the mold starting to sprout on leftover containers of broccoli spears and mashed potatoes. I wondered how long butter could last.  Certainly longer than milk and yogurt?  In the freezer, there was one more package of frozen meat, which probably had thawed and would make for one more meal. I marveled at my stupidity before the storm, at having bought frozen fish sticks – we could light our gas stove with a match, but I wasn’t about to try that with the oven.

That evening of our last meal, a LIPA (for those of you not from Long Island, Long Island Power Authority) contractor knocked on our door. My husband shook his hand too vigorously, as if he were meeting Steve Jobs, his icon.


The tall man in a hard hat and orange vest told us he would send a truck over to cut down the tree the next day. But our joy was dampened with the news that, beyond the tree, LIPA could do nothing until we got an electrician to replace the meter box: 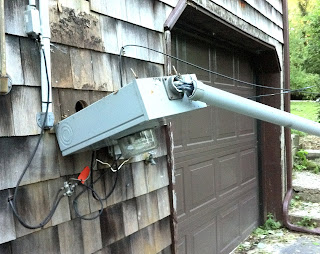 My husband’s face thinned out in disappointment. As if Jobs had turned out to be an imposter, a man in a Mickey Mouse costume.

He warned us that electricians were scarce, our being not the only ones with a downed meter box. Luckily, we have one who likes us so much, he gave us one of his amateur paintings of a sunset, after we made him rich by having him rewire our entire house, stripping out the aluminum fire-prone wiring to replace with copper. He put us first on his list for the following morning.
That same morning, a big truck with a cherry picker came to begin trimming down the tree, starting with the smallest top branches: 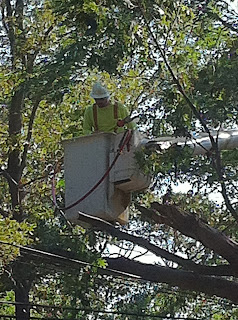 Now we know why the weight of the tree hadn’t forced it to crash to the ground. It had no weight. Completely hollowed out, as light as a feather: 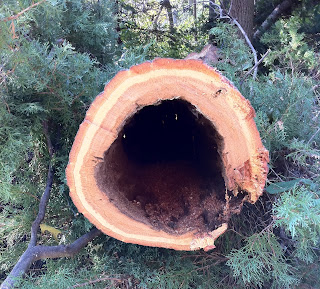 Now that the tree was taken care of, and our meter box replaced, we waited for the LIPA men to return.
They didn’t.
Not that day or the next day.
Or the next.
I finally opened the refrigerator. Wide. It didn’t stink as I was expecting it would. But I cleaned it out entirely, clawing around in the dark, pulling out moldy containers, dumping sour milk down the drain. I packed up our laundry and escaped with the boys to my mother’s house an hour and a half away; she at least had her own power restored (good thing, considering she only had one flashlight and an oil lamp).
And cable! Gramma had her electric and cable back, all in one day! So here I am, able to reconnect!
And there, back home, abandoned to the dark, is my husband. But he is smiling: after a warm shower at the gym each night, he has found a great place to connect up, the next best kept secret after Starbucks, the local pizza parlor. A most faithful patron now, they like him so much there, they took his picture: 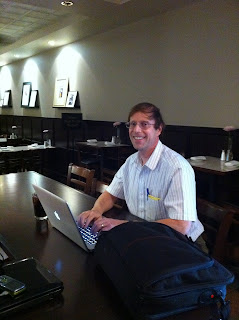 11 Responses to Irene’s Wrath on Refrigerators